Out Of The Caverns 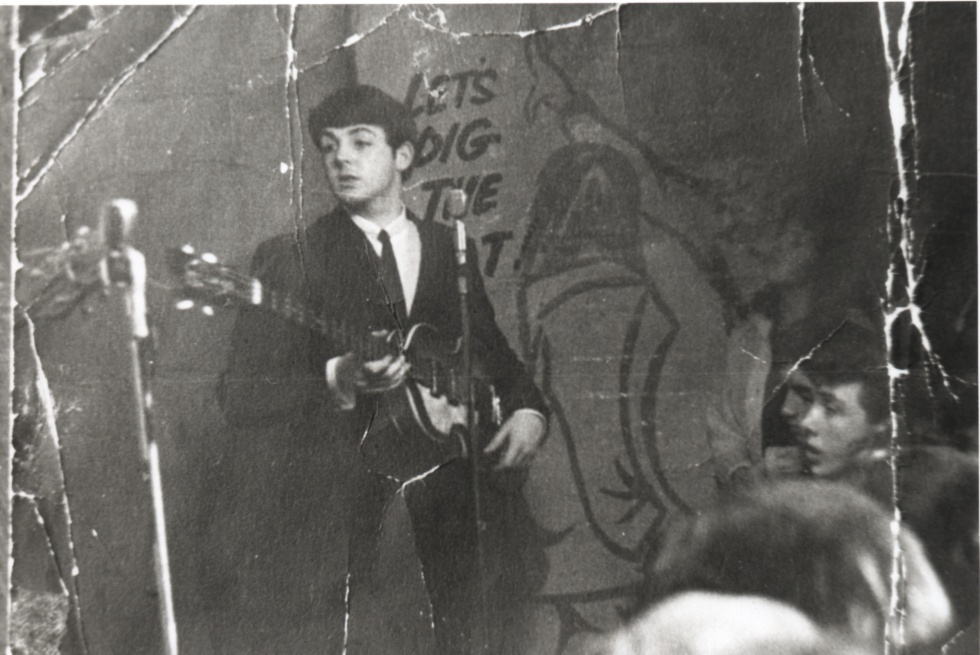 This feature from Record Collector in July 1997 has been overtaken by events and it prompted Liverpool’s Viper Records to release three volumes of Unearthed Merseybeat. They are all excellent, both historically and in many cases, musically too. They contain full notes about the tracks too – commercial over!

When Mark Lewisohn published his definitive book on the Beatles’ recording sessions in 1988, I was green with envy. Here was someone writing at length about tracks we would never hear. He wrote so well that I was itching to hear them. Then the Beatles changed their minds, perhaps, if I am cynical, because not even Paul McCartney could generate much interest for his new releases. The three double-CD sets which comprise the Beatle Anthologies have demonstrated the huge, worldwide market for previously unissued tracks and alternative takes from the 60s. Despite their denials, we are bound to see more anthologies in the future.

You only have to look at Record Collector’s index pages to see the vast coverage that has been given to the Beatles outtakes. Rather than repeat this material, I want to look at the material from other Merseybeat bands which was not released in the UK at the time. This to me is the dream Merseybeat Anthology set, Of The Caverns, and it shouldn’t be beyond some enterprising record company to put it together. Not only is this material known to exist, but I have a copy of everything listed and none of the tracks is in such poor condition as the Beatles’ home recordings in 1960 released on “Anthology 1″. Because Billy Fury came from Liverpool and recorded songs by Jimmy Campbell of the Kirkbys, I have included him on the CDs.

I’ve only included tracks that I have heard and among the other unreleased tracks are “I’ve Been Lovin’ You Too Long” (Clayton Squares), “One And One Is Two” (Billy J.Kramer), “Spoonful” (Mojos), “For What It’s Worth” (Searchers), “Ubangi Stomp” (Rory Storm and the Hurricanes, produced by Brian Epstein) and “I Still Love You” (Cilla Black, 1972 session produced by George Harrison). Johnny B. Great (Johnny Goodison) wrote a whole album for Billy J.Kramer that was never released, but Peter Skellern, who chanced upon the session, later wrote that it was the worst recording he’d ever heard! Quite apart from the famed Decca EP, there’s a tape of the Big Three at the Cavern but the balance is wrong as it sounds like a long drum solo from Johnny Hutch. OUT OF THE CAVERNS

(1) BUTTERFLY (Anthony September) – PAUL MURPHY AND JOHNNY GUITAR (1.24) It’s 22nd June 1957 at Percy Phillips’ recording studio in Kensington, Liverpool and the first known recording by any Merseybeat musician is being made by a key player, Johnny Guitar of Rory Storm and the Hurricanes. Paul Murphy had a pleasant voice and did make a few singles, but he was happier with artist management and record production.

(2) SHE’S GOT IT (Little Richard, John Marascalco) – PAUL MURPHY AND JOHNNY GUITAR (1.31) Just vocal and acoustic guitar but an energetic workout of the Little Richard B-side.

(4) BABY (Charlie Flynn) – THE DOMINOES (3.00) The Dominoes had ten tracks recorded professionally at their pianist’s house in Crosby. “Baby” is an original song, although to be honest, the lyric is little more than “Baby, you’re the one for me”. It is influenced by the US doo-wop groups and still has a lot of charm. Charlie Flynn left the Dominoes for another Crosby group, Ian and the Zodiacs.

(5) I’M LEFT YOU’RE RIGHT SHE’S GONE (Stan Kesler, William Taylor) / HAVE I TOLD YOU LATELY THAT I LOVE YOU (Scott Wiseman) / YODELLING SONG (Billy Fury) – BILLY FURY (3.28) Only he wasn’t Billy Fury then. Young Ronnie Wycherley wandered into Percy Phillips’ studio around the same time as the Quarrymen to make a demo that his mother could send to rock’n’roll impresario, Larry Parnes. To his own guitar accompaniment, Billy sang four Presley songs (the two above plus “Playin’ For Keeps” and “Paralyzed”) and “Come Go With Me”. Nobody had worked on young Ronnie and yet he sounds just like Billy Fury. The yodelling song at the end is amusing, a variation of “Indian Love Call”. He never sang like that again.

(6) GOOD GOLLY MISS MOLLY (John Marascalco) – KINGSIZE TAYLOR AND THE DOMINOES (1.58) Teddy Taylor was a teenage delivery boy for the butcher, but the voice is unmistakably the Kingsize Taylor of the Merseybeat years. Sam Hardie gives his parents’ piano a treatment that never could have been anticipated.

(7) ROLL OVER BEETHOVEN (Chuck Berry) – KINGSIZE TAYLOR AND THE DOMINOES (2.54) The best of the songs to be recorded at 18 Cambridge Road and putting the drummer at the top of the stairs was a master touch by engineer Bernard Whitty. Kingsize Taylor sounds so confident here: note the way he almost speaks some lines.

(8) SAD AND BLUE (Sam Hardie) – KINGSIZE TAYLOR AND THE DOMINOES (2.20) Sam Hardie’s matches Jerry Lee’s glissandos on this cheerful song about someone contemplating suicide. Good vocal from Kingsize, but that goes without saying.

(9) YES SIR THAT’S MY BABY (Donaldson) – THE SWINGING BLUE JEANS (2.30) The Blue Genes came up in the trad boom but unlike the Merseysippi and Blue Magnolia jazz bands, they switched to rock’n’roll. In 1961, whilst still a jazz band, they went to Oriole for a recording test with John Schroeder. It’s a lively energetic performance featuring banjo and an amplified guitar solo. I fail to see why they didn’t get a contract.

(10) I’M SHY, MARY ELLEN, I’M SHY (unknown) – THE SWINGING BLUE JEANS (2.35) The other side of the Blue Jeans’ recording test, this time with a lead vocal from Ralph Ellis. Their sound was such a ragbag of influences that it was both unique and highly enjoyable.

(11) PLEASE LOVE ME (Hal Carter) – BILLY FURY (2.05) In 1961 Billy’s road manager, Scouser Hal Carter, wrote this song for him, very much in the vein of “Jealousy”. Because Hal fell out with his employer, Larry Parnes, it was never released. “It was a bit bitchy,” says Hal, “but that’s the way he was.”

(12) THE STRANGER (Norrie Paramor) – THE REMO FOUR (2.25) The Remo Four, recorded at the Iron Door in 1961, with a Shadows’ hit. Don Andrew remembers, “It was a rehearsal on recorded on a little Grundig tape recorder and we did four tracks. My favourite is ‘The Stranger’. Colin Manley used to play every note that Hank Marvin played, the way he played it, and if Hank Marvin made a mistake, Colin used to copy that. We used to repeat the mistakes night after night, even if they weren’t meant to be there.”

(14) BONAPARTE’S RETREAT (Traditional) – THE SWINGING BLUE JEANS (1.52) Recorded in the ladies’ cloakroom at the Mardi Gras, the Swinging Blue Jeans merge country and jazz for this cover of a US hit by Billy Grammer.

(15) THE ISLE OF CAPRI (unknown) – THE SWINGING BLUE JEANS (2.55) Ralph Ellis takes the lead vocal on a jazz arrangement, which, oddly enough, sounds like “It’s Not Unusual”.

(16) BABY WHAT YOU WANT ME TO DO (Jimmy Reed) – DENNY SEYTON AND THE SABRES (2.35) They were only young lads mucking about, so that’s why they tried to turn Jimmy Reed’s R&B classic into a comedy song. If you could get rid of the comic turn from the second vocalist, this wouldn’t be too bad.

(17) KAREN (Bob Pryde) – DENNY SEYTON AND THE SABRES (1.43) This teenage ballad was written by local songwriter, Bob Pryde, and it was recorded by Mark and John for Decca in 1964.

(18) DIZZY CHIMES (Les Braid) – THE SWINGING BLUE JEANS (2.00) Bass player Les Braid wrote this catchy instrumental for the Blue Jeans. They did record it for Joe Meek, but that version is probably in the famed tea-chest tapes. This version was recorded in the Mardi Gras around 1961.

(19) SEND ME SOME LOVIN’ (Little RIchard) – THE SWINGING BLUE JEANS (2.55) There is a full tape of the Swinging Blue Jeans on stage at the Cavern early in 1963. It is not their standard act as Ray Ennis can’t sing due to a sore throat. They were still a jazz band but there are rock’n’roll overtones including the Ventures’ “Walk Don’t Run” and an impassioned vocal from Ralph Ellis on “Send Me Some Lovin'”, which has some tough rock’n’roll guitar alongside a jazz banjo.

(20) TUTTI FRUTTI (Little Richard, Dorothy LaBostrie, Lubin) – THE DENNISONS (2.25) The Dennisons made a rehearsal tape in 1962. The drummer is Clive Hornby, who has been playing Jack Sugden in “Emmerdale” for the last 20 years.

(21) A PICTURE OF YOU (Peter Oakman, Johnny Beveridge) – THE DENNISONS (2.00) A cover of Joe Brown’s summer hit, also performed on stage by the Beatles.

(22) SO HOW COME (Boudleaux and Felice Bryant) – THE MERSEYBEATS (2.19) Considering this is just a home recording from December 1962 of a young, new inexperienced group, “So How Come” sounds surprisingly good. Unfortunately, some idiot had recorded over part of the take, but luckily there are couple of false starts and so a completed version can easily be put together. Clearly, the Merseybeats were influenced by “A Date With The Everly Brothers” (released October 1960) as that is their main source of material.

(1) LITTLE LATIN LUPE LU (Bill Medley) – DENNY SEYTON AND THE SABRES (2.32) Denny Seyton and the Sabres recorded in 1963 at, would you believe, Percy Phillips’.

(2) HELLO LITTLE GIRL (John Lennon, Paul McCartney) – GERRY AND THE PACEMAKERS (1.40) Unlike many NEMS acts, Gerry and the Pacemakers were not given an original Lennon-McCartney song to record – or were they? Gerry and the Pacemakers’ version of “Hello Little Girl” emerged in 1992 on the UK release, “The Best Of The EMI Years”, although it sounds as routine as the Beatles’ version of “How Do You Do It”. Possibly they cut it as a demo for the Fourmost who were in Germany at the time, but Brian O’Hara of the Fourmost has a tape of John Lennon performing the song for him. At the start of the tape, John says that he is recording it in the toilet as it is only quiet place available.

(3) MISERY (John Lennon, Paul McCartney) – THE MERSEYBEATS (1.35) The television programme, “ABC At Large”, decided to have a battle of the bands, Liverpool v Manchester, with the Merseybeats and Deke Rivers. The Merseybeats did a song from the Beatles’ album and a recording exists.

(4) I’M IN LOVE (John Lennon, Paul McCartney) – BILLY J.KRAMER WITH THE DAKOTAS (2.25) The presence of John and Paul in the control may have put Billy off, but he had great difficulty in getting this Lennon-McCartney song down. The song was passed over to the Fourmost, but Take 32 is pretty good. Released in 1991 on the US collection, “The Best Of Billy J.Kramer And The Dakotas”.