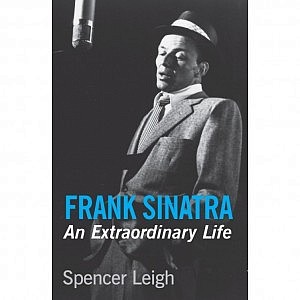 ‘I can say for sure that after reading Frank Sinatra: An Extraordinary Life you may want to read more about him, but you won’t need to.’ Sir Tim Rice

Tim Rice writes in his foreword to the book, ‘I have known and admired Spencer’s work as a music historian for many years. When he describes music and musicians of a bygone age, we become aware of so much more than the songs and performers. The era itself returns to life and we are reminded that all art, notably popular art, is inspired by, and inseparable from, its time and place, and if we don’t understand that background, the story is far from complete.’

Frank Sinatra: An Extraordinary Life looks at Frank Sinatra’s life and makes sense of it all, often telling the tale with good humour. ‘Sinatra was so active,’ says Spencer Leigh, ‘that you wonder when he slept. He never seemed to go to bed unless it was worth it.’

Frank Sinatra’s centennial is in December 2015. Frank Sinatra: An Extraordinary Life is a thorough investigation of his life and career, often based on original research.

This is a fact-filled, highly entertaining account of his life and career including many new interviews and special sections on Sinatra in the UK. The author Spencer Leigh comes to terms with the enormous contradictions in Frank Sinatra’s life.

Frank Sinatra was the ultimate party animal but also very productive. He made more records than anybody else, alive or dead: he made more films than most films stars. He, more than anyone else, established Las Vegas as an entertainment capital. He won Oscars, Grammys and Emmys and is universally acknowledged as the voice of the century.

Frank Sinatra lived his life in public, yet he hated the press.

Frank Sinatra made a TV special with Elvis Presley, yet he hated rock’n’roll.

Frank Sinatra associated with Presidents, yet he was friends with the Mafia. Leigh contends that had Kennedy not been assassinated, Sinatra’s actions could have brought down the Presidency.

Frank Sinatra was a family man, yet he couldn’t resist temptation.

“Spencer Leigh has a chatty informal style which makes the prose flow naturally. It is an eminently readable account of the life and career of a legend.” (In Tune International)

“Unique and very enjoyable with surprising facts along the way. When Frank was in Lancashire in 1953, he was driven by Ginger McCain who trained the Grand National winner. Red Rum. McCain recalled, “He was a little rabbit of a man. He was supposed to be a star but Red Rum knocked him into a cocked hat.” (Lancashire Evening Post)

“Leigh’s detailed picture portrait pulls no punches, illuminating Sinatra’s darker side. Sinatra is portrayed an unsavoury egomaniac who always wanted to do things his way, but he’s redeemed by his musical genius which comes shining through the book triumphantly.” (Record Collector)

“Incredible detail. Frank refused to stay in the Prince of Wales Hotel in Southport because the receptionist didn’t recognise him.” (Liverpool Echo)

“Very readable with many fascinating facts about other artists thrown in.” (Bing magazine)

Here are some reviews from Amazon:

About Spencer Leigh: The journalist, author and broadcaster Spencer Leigh is an acknowledged expert on popular music and he has been broadcasting his weekly show, On the Beat, on BBC Radio Merseyside for 30 years. McNidder and Grace recently published Best of the Beatles: The Sacking of Pete Best.

Spencer has written over 25 books, hundreds of album sleeve notes and obituaries for The Independent and the Oxford Dictionary of National Biography and he is an Honoured Friend at Sir Paul McCartney’s Liverpool Institute of Performing Arts (LIPA). As well as conducting original research, he has also interviewed scores of musicians about Frank Sinatra.

For reasons of space no index was included in this book, but one is available here.