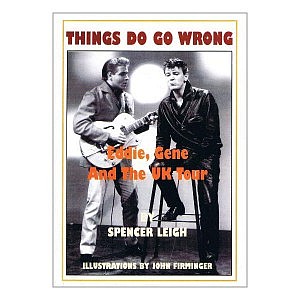 “Things Do Go Wrong” tells the story of the 1960 rock’n’roll tour starring Gene Vincent and Eddie Cochran. It was the first 100% rock’n’roll tour to tour the UK and it played to packed houses, encouraging many young musicians who found success in the British beat boom. However, the tour ended in tragedy with the death of Eddie Cochran.

This book is also available through Amazon in a Kindle edition with a little additional material.

“Things Do Go Wrong” tells the story of the 1960 rock’n’roll tour starring Gene Vincent and Eddie Cochran. It was the first 100% rock’n’roll tour to tour the UK and it played to packed houses, encouraging many young musicians who found success in the British beat boom. However, the tour ended in tragedy with the death of Eddie Cochran. “Things Do Go Wrong” provides an intimate, backstage picture of the tour, going into the hotels and coaches with the stars and speaking to the participants. “Things Do Go Wrong” is enhanced by press cuttings of the day assembled by the pop archivist, John Firminger.

“Things Do Go Wrong” is the fifth volume about the rock’n’roll era to be published by Finbarr International. It is a worthy successor to the histories, HALFWAY TO PARADISE and BABY, THAT IS ROCK AND ROLL and the biographies of Lonnie Donegan (PUTTIN’ ON THE STYLE) and Billy Fury (WONDROUS FACE). Although this is a tragic, almost Shakespearean, story, “Things Do Go Wrong” is also a very funny book, showing the problems that two Americans faced in trying to cope with the Britain of 1960.

“It was dark and London Airport was just a bunch of hangars. The plane landed and Gene Vincent came down the steps. He was a quiet, thin, wan fellow in a baseball jacket, and he said, ‘Hello, sir, I’m happy to make your acquaintance.’ I thought this will never do – he’s got to be a rocker. He’s got to say, ‘Hey, man, what’s happening?’ I was deeply disturbed and I wondered what we were going to do.” TV producer Jack Good

“Some of the rock’n’rollers had rough, raunchy voices but Gene had this pure golden voice – nobody else was singing like him. Gene was an original and apart from the echo, he wasn’t trying to be Elvis. He had his own voice, his own songs and his own style.” Graham Fenton of Matchbox

“The Grades had a lot of control and I couldn’t get Gene or Eddie on ‘Sunday Night At The London Palladium’.” Impresario Larry Parnes

“Eddie Cochran was dynamic. Nobody could hold a candle to him. The Americans seemed to have this glowing, positive way of doing things and Eddie Cochran, he was swagger, man, he was cool, he was it. He was a tremendous performer.”
Wally Whyton of the Vipers

“Eddie had a great trick, it had probably been used in America for years, but we didn’t know about it over here. He used to put a second string instead of a third string on his guitar, so that he had an unwound string and he could bend it and get those bluesy sounds that you never heard in England.” Joe Brown

“Coming to England was a big culture shock for them. The first time they were given fish and chips, it was in a great soggy mess, huge lumps of mush. They couldn’t believe that we ate it.” Big Jim Sullivan

“I don’t think they thought about food too much. Whatever they ate was washed down with drink. They were the wildest characters that we’d ever come across. They used to disappear into the night. We didn’t know where they went but in the mornings they were always very quiet.” Brian Bennett

“The story of the Gene Vincent/Eddie Cochran tour has been told many times, but never as completely as in this remarkable book.” (Chris Woodford, Now Dig This, March 2008)

“It’s a journey that Spencer Leigh recreates in amazing detail in a slender but thrilling book that captures not just the personalities of these prototype rock gods but the culture clash between their Technicolor lives and the black and white austerity of a post-war Britian they left in shock. A fabulous selection of period news cuttings add to the appeal of a complete must-have for rock’n’roll fans.” (Douglas McPherson, Classic American, May 2008)

***** REVIEW “Eye-witness accounts linked by well-researched and drily humorous narrative…With hindsight, it’s an iconic moment in pop and Leigh puts us right there with a perfect blend of history and atmosphere.” (Alan Lewis, Record Collector, July 2008)