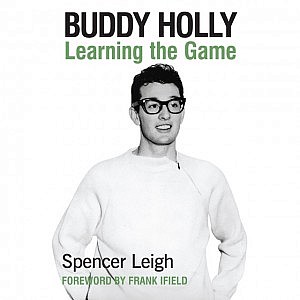 This book was published to coincide with the sixtieth anniversary of Buddy Holly’s death on 3 February 2019.

This book was published to coincide with the sixtieth anniversary of Buddy Holly’s death on 3 February 2019.

Copies can be signed and dedicated on request (no extra charge!)

Birth of Charles Hardin Holley, better known as Buddy Holly, in Lubbock, Texas, on Monday 7 September 1936. He only lived 8,184 days and yet he changed popular music forever.

When he was five years old, Buddy Holly beat his older brothers, Larry and Travis, in a talent contest by singing a gospel song, ‘Did You Ever Go Sailing’.

Buddy was skilled in leatherwork and made a case for his acoustic guitar. It was subsequently bought by the actor Gary Busey for $200,000.

Buddy had his own local radio show in Lubbock with another teenage musician, Bob Montgomery. It was known as The Buddy And Bob Show. Years later, Bob wrote the standard, ‘Misty Blue’.

John Wayne’s catchphrase in the western The Searchers was “That’ll be the day”. Buddy Holly realised it would make a good song title.

When Buddy Holly recorded ‘That’ll Be The Day’ in Nashville, the producer Owen Bradley said, “That’s the worst song I’ve ever heard.”

Buddy Holly and three musical friends from Lubbock – Jerry Allison, Joe B. Mauldin and Niki Sullivan – became  the Crickets: they had liked a group called the Spiders and wanted a similar name.

Buddy Holly made most of his recordings at Norman Petty’s studio in Clovis New Mexico. As well as recording under his own name and as the Crickets, he helped out with other artists and he can easily be recognised singing background vocals on Jerry Allison’s ‘Real Wild Child’.

In May 1957 ‘That’ll Be The Day’ was released in America. It would go to Number 1 in both Britain and America.

At home Buddy Holly played an acoustic Gibson J-45 but on stage he blasted away on a Fender Stratocaster. Buddy was a guitar nut and could never pass a guitar shop.

Because an agent thought the Crickets were a black act, they were booked into the Apollo Theatre in Harlem. Buddy said, “We’ll start playing before the curtain goes up and they’ll like us” – and they did.

‘Peggy Sue’ was originally ‘Cindy Lou’ but Jerry Allison wanted to impress his girlfriend and asked Buddy to change it.

Des O’Connor was the compère for Buddy Holly and the Crickets’ UK tour in March 1958.

The UK tour was highly successful and many lads wanted to start their own groups. John, Paul and George adapted another insect name to become the Beatles and they performed many of Buddy’s songs including ‘Words Of Love’.

Buddy Holly proposed to Maria Elena Santiago, who worked for his music publisher, the same day that he met her. She accepted and they were married in Lubbock on 15 August 1958. They honeymooned in Acapulco with Jerry and Peggy Sue.

Buddy Holly recorded with strings on 21 October 1958, the songs including his own ‘True Love Ways’ and Paul Anka’s ‘It Doesn’t Matter Anymore’.

Buddy Holly split with Norman Petty over royalty payments. The Crickets stayed in Lubbock and so Buddy formed the New Crickets, which included Waylon Jennings, later a ground-breaking country star.

Before his final tour, Buddy recorded new songs in his apartment in New York. They have been overdubbed with different accompaniments but the voice and guitar originals can’t be bettered.

In order to get some quick cash, Buddy Holly agreed to headline the Winter Dance Party throughout the mid-west in January and February 1959. The weather was appalling and they travelled in reconditioned school-buses which kept breaking down. Buddy’s drummer was hospitalised with frostbite.

On 2 February 1959, the Winter Dance Party played at the Surf Ballroom, Iowa. Buddy Holly was fed up and wanted his shirts washed. He commissioned a small plane to the next gig and the Big Bopper and Ritchie Valens join him.

In the early hours of 3 February 1959, the plane crashed. The pilot wasn’t qualified to fly in such terrible conditions. In his song ‘American Pie’, Don McLean called it “the day the music died”.

Amazingly the Winter Dance Party went ahead that night and one of the replacement acts was a young Bobby Vee. He was totally smitten by Holly and in a curious way, Buddy gave him his start.

Despite the ironic title, ‘It Doesn’t Matter Anymore’ became a UK Number 1.

Gary Busey was Oscar-nominated for playing the title role in The Buddy Holly Story (1978). The stage musical Buddy (1989) has been immensely successful and has never stopped touring. The first Buddy was Paul Hipp who played with Carole King’s band.

Buddy Holly is back in the albums chart with True Love Ways in which his original arrangements have been supplemented by the Royal Philharmonic Orchestra.