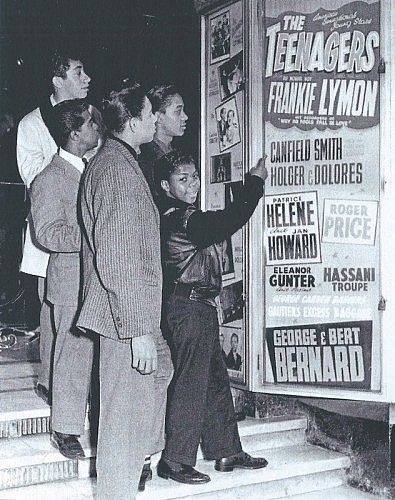 So far we have witnessed Frankie Lymon and the Teenagers’ meteoric rise, making some exceptional records and developing a fine stage act but still very young and being owed a duty of care which was woefully lacking. When things did go wrong, their manager Morris Levy put the blame on them, “They started fighting amongst themselves and they wanted everything split equally. They wanted to do solo numbers and none of them had the talent for it. The other Teenagers meant very little to me. There was nothing personal in what I did there. Anyone with a half a brain would pick Frankie Lymon.”

Nice guy, but then he was the model for Hesh Rabkin in The Sopranos and when he died in 1990, another music executive, Joe Smith, said at his funeral, “I am sure we all feel sorry that Morris has died but at least we can walk safely across Central Park tonight.”

The break in Frankie Lymon and Teenagers was a consequence of their UK tour in 1957.

During 1956, there had been no American rock’n’roll acts performing in the UK. The only artist to come over was Pat Boone so as I was saying, Britain had been starved of authentic rock’n’roll. That changed in 1957 with a succession of spring tours – Bill Haley and his Comets for the Grades; Mitchell Torok for Bernard Delfont; the Platters for Moss Empires; and Frankie Lymon and the Teenagers for Arthur Howes.

Haley mostly played one-nighters at Odeon Cinemas but the others starred on variety bills in a mixture of one-nighters and weekly residencies. They were mostly in the provinces. Frankie Lymon and the Teenagers had two weeks at the London Palladium which is a colossal achievement for a group who were unknown 15 months earlier and whose lead singer was only 14.

They were told that they would have to record their performance on ITV’s Sunday Night At The London Palladium as otherwise they would be working for 13 consecutive days. That was only a part of the story as the group was booked continuously for almost three months. The young boys were 3,000 miles from home without their parents and back then, long-distance telephone calls were difficult, expensive and definitely not encouraged.

Their weeks in variety were largely with Johnny Duncan and his Bluegrass Boys and specialist acts – Vera Cody and her horse Goldie, a one-man band, jugglers, dancers and acrobats. Goldie would do circus tricks and speak to the audience, although that was really a bloke off-stage with a microphone. God, we were gullible. The one-nighters were music based with the Chas McDevitt Skiffle Group, Terry Lightfoot’s Jazzmen and Billie Anthony. The posters caused tensions within the group as they read “The Teenagers with wonder boy Frankie Lymon”.

With a tour manager Jack Lewin, who worked for Morris Levy, and conductor Rudy Traylor, the group arrived in London for rehearsals and the press welcomed their American visitors. Things almost went disastrously wrong on that first night. Jimmy and Herman picked up some girls and brought them to the hotel, causing the manager to phone the police.

Frankie had his personal tutor with him, Miss Lulu Carter, not a typical name for a schoolmistress I grant you and indeed, she worked for one of Morris Levy’s night clubs. My guess would be that she filled in the paperwork and treated this as a paid holiday. Chas McDevitt tells me that he never saw any of them studying. He recalls, “I went to Frankie’s room to get some autographs and he was sitting on a chair with a bird on his knee and a bottle in his hand.”

Indeed, Frankie wanted sex with women who were twice his age and the big thrill about the Palladium was chatting up the scantily-dressed dancers. He would act big by swearing in front of them and almost certainly he found willing partners, some of them prostitutes. He also had a childish side. While they were in Manchester, he bet Sherman Garnes that he couldn’t drink a gallon of soup, which led to Sherman being sick in a plush dining room.

At first the group rehearsed with a pit orchestra but the arrangements didn’t sound right and so a sub-group was formed to play behind them on the stage itself – Larry Macklin (piano), Bob Russell (bass), Joe Ferris (drums), Jack Bickerton (tenor sax) and George Burt (trumpet).

The original intention had been to record a live album at the Palladium with the cooperation of EMI but this was scrapped, possibly because they didn’t have enough songs. The repertoire didn’t deviate from the same nine songs – ‘I’m Not A Juvenile Delinquent’, ‘I Promise To Remember’, ‘The ABC’s Of Love’, ‘I’m Not A Know-it-all’, ‘Baby, Baby’, ‘I Want You To Be My Girl’, ‘Teenage Love’, ‘Paper Castles’ and ‘Why Do Fools Fall In Love’, which they might sing twice.

When they opened at Liverpool Empire, Eddy Amoo was in the audience. “I absolutely loved ‘Why Do Fools Fall In Love?’ and I still do. My mam took me to a Frankie Lymon and the Teenagers concert at the Empire. I was about ten. It was my first concert and I was absolutely thrilled. There were only a few coloured people in the audience, and I remember somebody pointing me out and saying, ‘There’s one of them! There’s one of them!’, which was really funny. I said on the way home, ‘That’s what I want to do, that’s what I want to be’, and my mam was laughing and saying, ‘Okay, son.’” Eddy got his way, first as a member of the Chants and then as part of the Real Thing.

The daily newspapers rarely sent anybody hip to review rock’n’roll acts and one condescending review would follow another. The review in The Times was typical: “The emphasis is on youthful sophistication, but artistry is a quality seldom acquired except after years of application. Young Master Lymon himself has unquestionably the vocal exuberance and rhythmic animation of his race, but these are traits which other members of the group seem surprisingly to lack. At one point last night, one of their number yawned while an announcement was being made, and the shades of the great Palladium troupers of the past must have shuddered at the sight, but a youthful audience roared their approval of all that was said or sung.”

Some newspapers carried interviews with Lymon, which are revealing. Frankie said that he preferred Stan Kenton, Dave Brubeck and Ted Heath to rock’n’roll. Impressive that he got a British name in there. These leanings towards jazz inspired the next project.

Rudy Traylor found himself on a secret mission. Norrie Paramor at EMI wanted to record Frankie singing standards but without the Teenagers. Instead Frankie would work with a British vocal group rehearsed by Bill Shepherd, effectively his act, the Coronets.

Frankie knew Ella Fitzgerald’s version of ‘Goody Goody’ and he performed it enthusiastically. Then there was ‘Begin The Beguine’, ‘Blue Moon’, ‘You Were Only Fooling’, ‘Let’s Fall In Love’ and ‘Over The Rainbow’ – his phrasing was excellent but miles from rock’n’roll and closer to Little Jimmy Scott. Being in these surroundings didn’t faze him and with the right marketing and management, he could have been a Bobby Darin, who had yet to establish himself.

It might have seemed odd to have a 14-year-old reminiscing on love but the idea appealed to Paramor and in the next few years, he would record other young performers, Laurie London and Helen Shapiro, in the same way.

The Teenagers soon sussed that they had been cut out of the sessions and threatened to strike, so that Frankie would have to perform solo. They accepted the position after being told that backing vocals would be added in America. Certainly there were further sessions in America but this time Frankie sang with the Ray Charles Singers.

By then, it was almost over. When they returned to America, Frankie told one reporter, “The headline notices I received in Britain caused other members of the group to become jealous. Since our return, we have hardly spoken.”

Their new single, recorded in January, with the Panama Francis band was creating problems. ‘Out In The Cold Again’ featured Frankie Lymon and a very subdued Teenagers but despite the billing ‘Miracle In The Rain’ only featured Lymon on his own. The other Teenagers felt they were being sidelined.

While Frankie Lymon was considering a new market, his brother Lewis was stepping into his old territory. The brothers didn’t get along but they were very young. When fans had come to the family’s tenement to see Frankie, Lewis would pretend he was him. Maybe it was just as well. Ronnie Spector met the real Frankie: “He was very disappointing. He was very full of himself and egotistical like a big star. I thought he would be innocent like his records.”

Lewis Lymon, who was born in 1944, formed the Teenchords. They were signed by Bobby Robinson to his Fury label in 1956 and the first single was ‘I’m So Happy (Tra-La-La-La-La-La)’, written by Robinson. The B-side ‘Lydia’ was written by Lewis about a neighbourhood girl, Lydia Perez. It’s an excellent single with the selling angle being Frankie’s younger brother – only it didn’t sell.

In striped jackets and white pants, Lewis Lymon and the Teenchords sang ‘Your Last Chance’ in the rock’n’roll film, Disc Jockey Jamboree. Unsurprisingly, they were very similar to the Teenagers and like Frankie, Lewis could do the splits. They cut an answer to ‘Why Do Fools Fall in Love’ called ‘I Found Out Why’, but ‘Too Young’ was their only single to secure a UK release. Issued on Oriole in 1958, it is now a prime rock’n’roll rarity.

In July 1957 both Frankie and Lewis were on Alan Freed’s Summer Festival at the Paramount in New York but the brothers were not on stage together. The Chas McDevitt Skiffle Group had a surprise US hit with ‘Freight Train’ and came to the Paramount to see them. No doubt the Teenagers were amused to see their sweaters. Chas had loved their monogrammed college sweaters with a huge T on the front and he had ordered similar ones with an M.

Two of the Teenchords stole a car and were caught by police. Mrs Lymon told Lewis to leave the group, but he had never taken music very seriously. In 1962, he and Frankie did appear at the Apollo on stage for the first and only time together.

Around this time, ‘Goody Goody’ was released as a single in Britain and America. The Alley Cat gossip column in New Musical Express said, on 19 July 1959, “Could it have been memories of exciting romantic flings in Britain which resulted in Frankie Lymon’s latest waxing ‘Goody Goody’?” So they knew – and nobody had done anything about it.