As published in Record Collector, November 2016 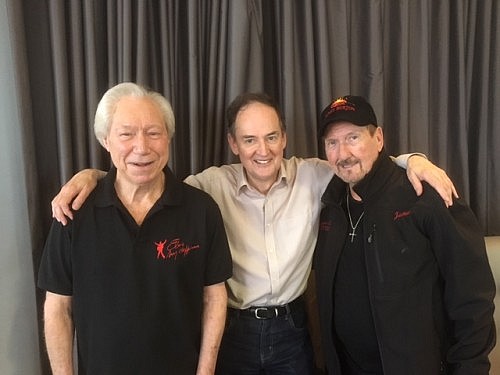 After a rocking set with James Burton and Glen D Hardin, the 50s rocker Marty Wilde told the audience, “I couldn’t possibly turn down an invitation to play with James and Glen. When you consider all the places that they could have played tonight, it is amazing that they are here in New Brighton.” The audience thought so too, but just what were Elvis Presley’s most trusted musicians doing in a faded seaside resort, although admittedly one that is finding its way back?

The answer lies with Doug Darroch, who owns the area’s most singular attraction, Fort Perch Rock, which was built in 1825 to keep the French out. “A good idea,” said the Duke of Edinburgh on a recent visit. Since James Burton’s appearance at the Wirral Guitar Festival in 2008, he and Doug have become close friends and so the visits mix business with pleasure. This time James brought Glen D Hardin and their itinerary took in two shows at the Floral Pavilion, a meet-and-greet at Fort Perch Rock, and a trip over the Mersey to play the Cavern.

James, a quiet man with a wry sense of humour, told me, “I love coming here and I love the history of the Beatles. A couple of years ago I gave a talk at Paul McCartney’s school and this time I’ve been to John Lennon’s house. His acoustic guitar was hanging on the wall and the guide said, ‘No one ever plays this but it’s okay for you.’ I figured that John might have known the lick to ‘Susie-Q’ so I played that in his bedroom and it was a great feeling. Maybe he played that same lick on that same guitar in the same place.”

Louisiana-born James Burton wrote that lick when he was 14. “I was just experimenting,” he says, “by mixing blues and country music. I came up with that little riff and I made into an instrumental. I went to work with Dale Hawkins around some little clubs in my home town of Shreveport, Louisiana and we sometimes played it ten times a night. Everybody loved it, and Dale said, ‘I gotta write some lyrics’ and he came up with ‘Susie-Q’.”

Although a legendary guitarist, James Burton is largely self-taught. “I picked up a lot of stuff off records. Chet Atkins was my main hero but I also loved Merle Travis and Les Paul. Later I thought I should have some lessons but I didn’t want to change what I had going. I really felt that God was my teacher and He gave me my talent and my career in music, so I never want back to learn the basic stuff.”

The Texas-born keyboard player Glen D Hardin has a similar philosophy. “When I was eight years old, a gentlemen came to our house and he played some gospel music on the piano. I thought, ‘If he can do that, so can I.’ I started plonking around and somehow I got my left hand going. When I went into the record business, I realised that there were things I needed to know and I did find a teacher, but most of what I do is by trial and error.”

Keith Richards has said that he didn’t buy Ricky Nelson records: he bought James Burton records. James played a Fender Telecaster and created such magical moments as the 16-second break in ‘Hello Mary Lou’, while Glen D joined the Crickets, coming to the UK to tour on the back of the Bobby Vee Meets The Crickets LP. Glen recalls, “I knew Buddy Holly in Lubbock and the Crickets asked me to join after Buddy died. When we were in London, I ran into John and Ringo and they told me how much they loved Buddy Holly and how they got their name from the Crickets. John thought it was the cleverest name he had ever heard and had wanted one like it.”

James and Glen became friends on the US TV show, Shindig, as part of the house band, the Shindogs. “That was a great show,” says James, “and good for me. I got to play guitar for Howlin’ Wolf.” James was responsible for the Bakersville twang, a new country sound for the likes of Buck Owens and Merle Haggard. “I never thought I was doing anything special. Merle said to me, ‘I like what you do on the Ricky Nelson records, can we go with that?’ and that’s what I did.”

Glen worked for Reprise, arranging Kenny Rogers’ hit, Ruby, Don’t Take Your Love To Town, and several songs for Dean Martin. “Dean would ask me to write lyrics sheets that were really big. He would invite lady friends to the sessions and he never wanted the ladies to know he wore glasses.”

James Burton was also at Reprise: “We got a call for double-sessions three days in a row with Frank Sinatra. Frank came in and he said, ‘Ladies and gentlemen, I’m not in good voice. I am going to go to Palm Springs to rest up and then we will regroup.’ Under the union rules, we still had to be paid, so everybody was running to the phones to see if they could also get back the sessions they had cancelled. (Laughs)”

And then came the big one. “Elvis called me in 1969 to put a band together. He called it the TCB band and I called it Taking Care of Burton. Naturally I called Glen D.”

“And was it your job to make out the set list?”

“Yes, but he never stuck to it. One time he played Blue Christmas in August. Elvis would change the tempos from one show to another and sometimes he did those old hits really fast. It was always hard on Ronnie Tutt who played drums but those concerts worked out great.”

Glen D: “He was very unpredictable and you had to keep alert. He would come up with old songs from the 20s and 30s that we hadn’t heard in years. One time Elvis and I were walking down a hallway and he said, ‘Do you remember The Wonder Of You?’ I said, ‘Yeah, good song.’ Later that day I orchestrated it for him. Simple as that. He had an extremely good range and it was fairly easy to determine what key he would want. I don’t recall hitting any of those notes ever being a problem to him.”

Did he talk about coming to Britain or playing Europe? James: “Sure. There were plane-loads of people coming from the UK, Europe and Japan and he often talked about taking the show to them. He never did it but I know he wanted to.”

And here they are at New Brighton.

Besides James and Glen, the first show featured 81-year-old skiffler Chas McDevitt and the rockabilly/doo-wop trio the Jets. When a veteran Merseybeat singer Cliff Roberts opened the show, somebody shouted, “Who are you?” “A heckler already,” said Cliff but it was a reasonable request as he had not been announced. It’s best to announce everybody as the day after this concert, I met someone who thought James was Scotty Moore. That is notwithstanding a short Q&A with James and Glen. James said that Elvis had given him lots of jewellery and someone added, “And now it’s on ebay.”

After 35 years, the Jets are still very vibrant and lively and they have two albums awaiting release. She’s A Heartbreaker, was Runaround Sue with new words, so why did they follow it with Runaround Sue? You shouldn’t draw attention to it. There was a fine a cappella medley which comes from their Kings of Harmony show and they concluded with three electronic drum pads on which they beat out Bo Diddley, but I did tire of their constant calls to buy CDs. Even tackier, it was utterly naff to sell CDs out of a large suitcase like a street trader.

Nearly three hours into the show, we were getting desperate to hear James Burton and Glen D Hardin play. The Brookside actor Vince Earl who was seated in front of me, said in a loud voice, “If Tommy Steele comes on next, I’m going home.”

Finally, we got Marty Wilde, accompanied by James Burton and Glen D Hardin. Still in fine voice, Marty had chosen Ricky Nelson songs rather than Elvis ones and we got Believe What You Say, Stood Up, It’s Late and My Babe as well as Lucille, his own Bad Boy (with a neat James Burton solo), A Mess Of Blues, A Teenager In Love and a wild Whole Lotta Shakin’ Goin’ On. Glen had asked for an electric piano and instead had a badly mic’d upright and he was not facing the audience. Apart from two short solos, we had to strain to hear what he was doing.

The following day at the soundcheck, Glen D was happier. He had an electric piano and he ran through his compositions for me. “My friends Jerry Allison and Sonny Curtis from the Crickets were making good money and so I wanted to give it a try. I came home late one night and completed about half of Count Me In and then I thought, ‘Well, if I still like that when I wake up, I’ll finish it.’ I played it for Snuff Garrett, who produced Gary Lewis and the Playboys, and he said, ‘We’ll cut that tonight’ and it sold a million, so I got lucky.”

As Glen played the opening notes to Let It Be Me, James Burton joined in. “Sing the verse, Spencer,” said James but even though I could have sung with Elvis’ musicians, I thought it wiser to turn down the invitation, pointing out that Tony Crane of the Merseybeats was in the wings. That night the Merseybeats sang Runaway, The Wonder Of You, Bridge Over Troubled Water with James and Glen and local musician Don Woods performed a Ricky Nelson set.

On Sunday James and Glen D met at the Wall of Honour in Mathew Street which celebrates acts who have played the Cavern. Space is at a premium and it looked as though James Burton’s brick would be stuck over Johnny Dankworth’s.

The Cavern itself was like an oven. Although fans fainted when they saw Elvis, the ones who fainted at the afternoon concert were overwhelmed by the heat. Chris Clayton is as good as Elvis impersonators get and both James and Glen enjoyed playing with him.

Over the weekend, it was apparent that James and Glen D were superb musicians and delightful characters but with little showmanship on stage. They are essentially session musicians and you don’t move in the studio, but could it also be because they worked with Elvis? Elvis wanted the spotlight on himself, hence any individuality was stifled.

It had been great to inspect James Burton’s guitar with its fiery blue-and-gold motifs. Look closely and you can see JB’s initials in there. Glen D doesn’t have a personalised piano but he does have a special one at home. “I bought it from a sale of equipment at the MGM sound stage in 1976. It had been used since 1935 and when I play it, I imagine Fred Astaire dancing on the keys.”